I address this topic the most, but it’s always worth repeating. If keeping your hair is important to you, the slightest change you notice either in texture or "thickness" or just a little more scalp is visible - this is concern enough to make an appointment for a treatment recommendation. Do not wait. Be proactive about hair restoration. The phrase “better late than never” does not apply to hair loss. Your mentality should be "better early than late."

Waiting "to do something about it" puts the rest of your hair at risk, even though it may not be visible to you in the mirror.

Healthy hair follicles that have full density and long growing phase are called terminal hairs. This is what we want to see when you come in. Remember when your hair "used to be thick" before it started to change? Not all hairs on your head are terminal hairs. Once you notice a change in texture, thickness, more scalp is showing etc. this usually means that terminal hairs are miniaturizing. 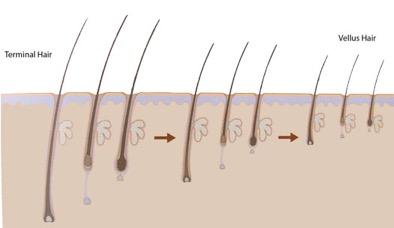 Why they miniaturize is for another blog post, but typically, once miniaturization begins, it can progress to the point where the follicle sheds and does not grow back. To put it another way, (depending on the situation) once your hair starts to thin, it can continue to thin until the follicle is gone resulting in baldness.

Can miniaturization or thinning be stopped or reversed? Hopefully, but this is why coming in at the first sign of change is so crucial.

When I see new patients, the conversation usually starts with addressing main concerns - what brought them in - which may or may not be apparent at first glance i.e. thinning/bald areas.

However, to give a treatment recommendation, I first need to see the bigger scenario, because there could be more going on that you cannot see with the naked eye.

I take magnified pictures of hair follicles in different locations on the scalp and estimate what percent of follicles are at risk by analyzing what is not so obvious - the ratio of terminal hairs (the biggest) to other hairs in the picture (the miniaturizing ones).

Are there more terminal hairs? This usually means this person has come in early enough to have ample treatment options, which will save their hair and save them money in the long run.

Do I see more hair miniaturizing? Any hair follicles smaller than terminal hairs are in a state of miniaturization. So remember when I said at the slightest change in your hair, get help? This is why. The change you notice usually means hair is miniaturizing. Ideally, if there is partial miniaturization, you may still have treatment options, but potentially not as many if you had come in sooner.

An Example of Miniaturization:

Recently I saw a male in his late 30's, whose concerns were a thinning crown and receding hairline. He had a head full of thick wavy hair - you would never suspect he was losing his hair if you saw him out in public, but his concerns were confirmed, and I classified him as a Norwood III vertex. (This can be seen below.)

Then I took pictures of his scalp and hair to get an idea of:

These three images shown below were taken in order from the hairline back to the crown. 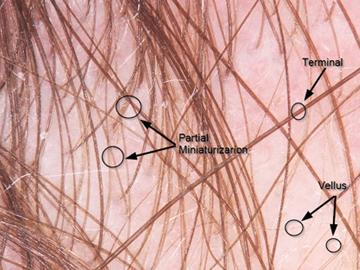 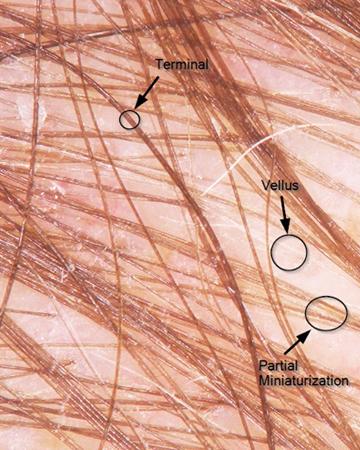 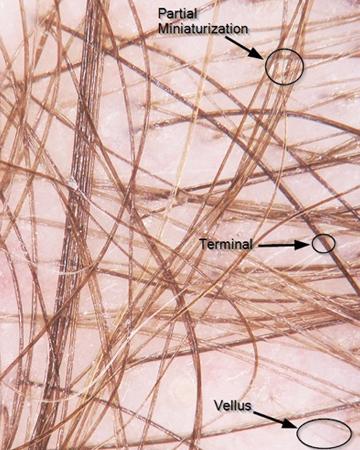 1. How many follicles are at risk (i.e. started the miniaturization process)?

As you can see, in all three pictures the majority of follicles in each of those areas are partial miniaturized follicles. So even though he came in with concerns about temporal recession and thinning crown which put him at a NW III vertex -- looking at magnified pictures -- he has more areas to be concerned about than he first thought. Without any treatment he is potentially headed towards a NW Va if all of the miniaturizing follicles eventually disappear

2. What is the opportunity for improvement?

Because he came in when he did, luckily, the majority of follicles are in a midrange of miniaturization and have a good chance of responding to medical treatment leading to an increased hair density, meaning there is an excellent opportunity for improvement. (Once the follicles get very small, say below 40 microns diameter, then they may be beyond rescue.)

For this patient example, I feel the best treatment that has provided the most consistent positive response to increasing the density is our CRP (cytokine rich plasma) with ACell. We offer this with and without human follicular stem cells.

Getting help SOONER rather than LATER hopefully means a large percentage of your follicles are still treatable or in a midrange of miniaturization - before you have much permanent hair loss. Again, if you notice a change, it is likely even more follicles that you cannot see with the naked eye have already started to decline.

I encourage patients to come in as soon as they notice a change in their hair so we can evaluate your situation, and determine how many follicles are at risk, and what is your opportunity for improvement in the future.