Male pattern hair loss is something a majority of men could experience at some point in time. Even though the severity of hair loss may vary person to person, it still begs the question why? Genetics (which controls ethnicity) is the primary cause of hair loss, and interestingly enough, specific races have higher rates of hair loss than other groups. Let’s take a look at different races and the varying likelihoods of baldness.

There are three basic types of Caucasian or Mediterranean region baldness patterns. Ebling, who developed classifications for particular ethnic groups, suggested the five stages of balding for these three hair types as shown below.

While the numbers are different according to different surveys, it appears that either Greece, Macedonia, or the Czech Republic has the highest rate of baldness in the world. These nations each have over 40% of men with acute hair loss.

Japan, Korea and the Rest of East Asia

People of East Asian descent and especially Japanese, experience hair loss at one of the lowest rates in the world, and start much later in life than other places. Those that do lose hair, generally, start in their 40s and 50s rather than their 20s and 30s.

East Asians are furthest from the Mediterranean region and also have the lowest rate of baldness which does not seem to be an accident. Incidentally, their baldness rate can range from 20% to the low 30s, which is still a significant portion of the population.

Africa and the Middle East

Generally, the closer the population is to the Mediterranean Sea, the higher the rates of male pattern baldness. People from countries in northern Africa have very high percentages of baldness, from the high 30s to the low 40% range. These individuals generally either have the Semitic or Latin baldness variation, depending on whether they have more Arab roots or more mixed roots.

Men from sub-Saharan Africa have about an average level of baldness, ranging in the mid 30% rate. They have a mix of the Semitic and Latin hair loss patterns.

While Iranians are in the Middle East, they have a peculiarly high rate of baldness, greater than many other countries in the region. Their population edges on 40% with male pattern baldness. This interesting twist is noted by genealogists that study the movement of peoples in the region.

South Americans, Central Americans, and Mexicans have varying degrees of baldness. Those with a higher rate of blood directly descending from Spain are more likely to be bald. Individuals that have more Native American genes or sub-Saharan African genes have less male pattern baldness. 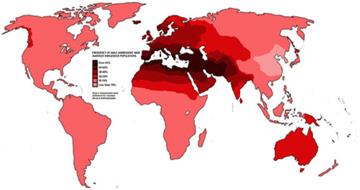 You may think the weather and the environment of different regions play a role in the association between geography and higher hair loss rates. However, this is not the case. More research is needed on this subject, but those from specific regions just have a higher hair loss rate and are passing it along to their heirs.

HT&RC is a leading clinic helping to serve men and women of all races and ethnicities experiencing hair loss. Our practice helps find answers and formulate treatment plans to restore the rich luster of your original hair. For more information, please contact us.