Prediction of hair loss is a prevalent topic given how many people experience alopecia in some form. When a male comes in for a hair loss consultation, I'm trying to look into the “crystal ball” to question where the patient sitting in front of me will end up or which stage in hair loss progression could be the endpoint, so I can recommend appropriate treatment options.

In general, men with MPHL or androgenetic alopecia proceed through hair loss in an expected pattern or sequence laid out by the Norwood-Hamilton scale. However, by looking around, you will notice not all men with genetic hair loss will end up with the most advanced Norwood VII (7) stage. In fact, even though men proceed through the same stages along the way, the progression of hair loss may stop at any of the stages and hold at that particular stage throughout their lives. 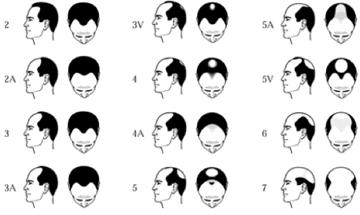 Pieces of information obtained during the consultation help me in determining how far I think their hair loss will go. One significant piece of the puzzle is studying hair loss in near relatives on both the father’s and mother’s side of the family. I'm trying to get a handle on whether there are advanced degrees of hair loss in the family as genetics plays a role. Also, magnified pictures taken of hair follicles on the scalp show the present degree of hair miniaturization. All of this data allows me to determine which stage on the Norwood-Hamilton scale they are currently in, and then a future pattern can be formed.

I want to illustrate this “prediction” through a conversation with a recent patient. A male in his mid-forties came in to see what might be done to slow down his thinning hair. At present he is a Norwood III vertex (or 3V on the chart), meaning that he has temporal recession as well as thinning in his crown.

On exam using trichoscopy with magnified photographs, it was clear throughout the top of his scalp 90% of his follicles were in some mid-range of miniaturization even though this same area still has considerable good density from any cursory glance by another person.

So the question is “at what stage will the hair loss stop” even without medical treatment, and this is what we are considering when planning a hair transplant on a younger patient. We want to leave enough donor hair “in the bank” for potential future use if another transplant is needed because of progressive hair loss.

The follicles in the back and sides of his scalp had good density with minimal to no miniaturization. Since androgenetic alopecia is a process of miniaturization, it follows that he is destined to progress far beyond a Norwood III vertex (3V). By family history, his mother and father have little hair loss. However, his brother is a Norwood IV (4 on the chart). Two uncles are Norwood VII (7), his paternal grandfather is a IV (4), and maternal grandfather is a Norwood III (3). With this information and because almost all of the hair on the top of his head was beginning to miniaturize, I believe he will end up closer to a Norwood VI (6).

At this point, his treatment protocol consists of several medical therapies including Rogaine, LLLT, WNT spray and hair vitamins, as he is not interested in finasteride. We will duplicate objective hair density measurements from the same location on the scalp over time using the Hair Check device and follow him to see if the progression is slowing or if he might add other treatments like Hair Follicle Regeneration. Of course, he would always be a candidate for a transplant, but he is not ready for that procedure at this point.

The main take away from this illustration is the number of treatment options this patient has at present. Had he waited to seek medical help, he could progress through the stages of hair loss to a point where he has only limited, more expensive treatment possibilities left. Therefore, I encourage all patients to address hair loss and hair thinning earlier than later to take advantage of as many options as possible.