I have been following a 48-year-old female for the past year who was diagnosed with breast cancer some three years ago and was experiencing generalized thinning over her scalp and eyebrows when she came to see me. She was negative for the gene mutation of BRCA1 and BRCA2 genes with no positive nodes at the time of surgery when she underwent bilateral mastectomies with reconstruction.

When she came to my office, she had been on Tamoxifen for two years. Hormone receptor-positive breast cancers need estrogen and/or progesterone (female hormones produced in the body) to grow, and Tamoxifen attaches to the hormone receptor in the cancer cell, blocking estrogen from connecting to the receptor. This slows or stops the growth of the tumor by preventing the cancer cells from getting the hormones they need to grow. Unfortunately, hair loss is a side effect of the medication.

About a year ago I instituted Formula 82M (minoxidil with Retin A and a mild steroid), a laser cap, and Latisse (for her eyebrows). She returned this past week and had noticed stabilization of her eyebrows and an improvement in the density of her scalp hair as shown in the photographs below. 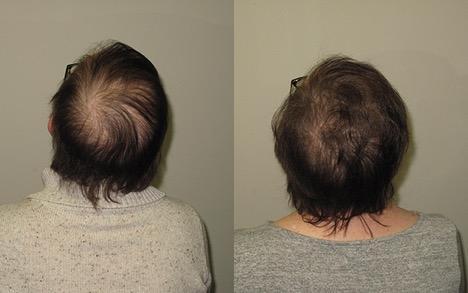 Ahead of her follow up appointment, I came across a 2016 article by Karatas, Sahin, Sever, and Altundag addressing the topic of hair loss in the face of hormone therapy in breast cancer patients, which I thought would be helpful information to share.

This article points out that those with breast cancer placed on endocrine therapy have a 25% chance of developing hair loss. These hormone treatments involve aromatase inhibitors and Tamoxifen treatment, which is also used in the adjuvant and/or metastatic setting of patients with Estrogen Receptor + and/or Progesterone Receptor+ invasive or noninvasive breast cancer.

In normal circumstances, both men and women have increased androgen and 5-alpha-reductase receptors in the frontal versus occipital scalp, but men have more receptors than women, and also with higher testosterone and DHT levels, men experience male pattern hair loss before women.

However, these endocrine treatments reduce estrogen levels, essential for female hair growth, creating a higher level of testosterone, so women begin experiencing male pattern hair loss as well as thinning all over, and even though this hair loss is advertised as a temporary problem, it comes with a high emotional cost and an important issue to address. Patients are usually on these treatments for five years, and now a new recommendation may suggest being on the medications for up to eight years.

Minoxidil has been used for years promoting hair growth, but this article identifies other treatments that work to prevent endocrine therapy induced hair loss (ETIHL) without increasing the risk of cancer returning.

“In healthy adults, estrogen is known to play a key role in the hair development in tissue levels and also increase the amino acids and trace elements in hair texture.”

ETIHL may be prevented by various trace elements and/or vitamin supplements including Vitamin B6, Vitamin C, Vitamin D, Vitamin E, Folic Acid, oral Omega-3 and -6fatty acids and topical 5-alpha reductase inhibitor which are all discussed below:

• B6 Supplements: Can decrease the support estrogen builds in hair texture and other tissues. Even though B6 may be used to treat baldness, it can theoretically reduce the estrogen effects on the scalp, so it may not be useful in the management of ETIHL.

• Vitamin C: Improves the likelihood of estrogen results in vascular levels and also lessens the effectiveness of testosterone. Vitamin C also has a protective role against breast cancer, coronary artery disease, and osteoporosis.

• Vitamin D: Although known to increase the survival of breast cancer patients, low levels of Vitamin D or lack of Vitamin D receptor can result with hair loss, so it is still uncertain whether Vitamin D supplementation increases the proliferation of hair follicles.

• Vitamin E: Has been shown to lessen the effectiveness of estrogen in breast tissue, and reportedly there is an association of increased levels of estrogen, with low levels of vitamin E. However, potential androgenic and anti-estrogenic activity is linked to patients receiving Vitamin E.

• Folic Acid: Reported to have positive effects on hair health, but some studies suggest folate may increase the tissue levels of estrogen, indicating that high levels of folic acid may lead to breast cancer.

• Omega-3 and -6 fatty acids: Have a positive effect on the prognosis of breast cancer and many other cancers. Also shown is that even six months after use, these fatty acids have a protective impact on hair health through antioxidant results on the scalp tissue.

Back to my patient's follow up appointment- after reviewing the article, and taking in account the positive response my patient had to the Formula 82M (minoxidil, retin A, and steroid), laser cap, and Latisse, I chose to continue these and add topical 5-alpha-reductase inhibitor, Vitamin C and Omega-3 fatty acids.

Back to blog
Blog search

Get your questions answered.

Grab our free hair transplant guide! Curious what hair transplant procedures at HT&RC are really like? We compiled our most common Q&As in an easy to read format. Where does hair come from? How long is recovery? Does it hurt? How many grafts will I need? Who does the surgery? Plus many more...

We’re conveniently located in Middle Georgia. If you’d like to talk directly with Dr. Gray before you travel, just give us a call.

Special Offer on Transplants in May and June!